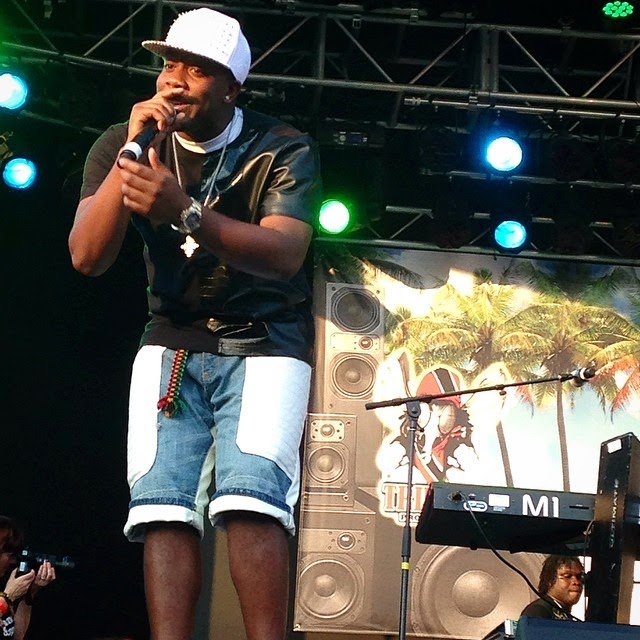 It was a sweaty, beer sipping, hip-swiveling good time.
Jacque, Alexis and I drove to Six Flags Great Adventure to cover the Summer Caribbean concert for Trenton 365.
All the elements were in place: scantily clad young women, heat, chest compressing amps and speakers, more heat, flags from every Caribbean nation imaginable, some more heat, smiling happy faces, Heineken and more heat. Oh, and some pretty fantastic young and established reggae performers. Did I mention the heat?
The line-up included, but wasn't limited to:
But first, Alexis and I needed to ride a roller coaster.
Six Flags used to be my home away from home. I remember when Tim Burton's Batman was released along with every commercial marketing ploy imaginable -- like hounds -- including partnering with Six Flags to build rides at every park with a Batman theme. Batman the Ride was magnificent! Batman the Chiller...not so much. It was like being in an earthquake, a pile-on car accident and a blender all at the same time. It no longer exists. I remember riding Shock Wave, the first stand-up roller coaster and daring to ride it again after it stalled one afternoon while I was on it! The Six Flags managers led us down these steep stairs, to the ground, and my idiot girlfriend and idiot me walked right back in the line because we weren't about to miss this new, ‘upside down while standing up’ thrill ride.  Then there was the Great American Scream Machine, the seven-loop masterpiece and (I believe at the time) the most advanced coaster in the United States. We certainly thought so. And we got to a point where we'd ride once upon entering the park and another time just before leaving, just to prove we were fearless supergirls.
But I hadn't been to Six Flags in a decade. Turns out, it was like riding a bike.
The ride called "Medusa" is now renamed "Bizarro," and Alexis and I -- after leaving our bossman Jacque Howard holding our backpacks -- had just enough time before showtime to get a ride.
Seven loops. Lots of smiles. Woohoos for everybody. Now onto the show coverage.
I also remember when Six Flags was the home of the boy band concert. Everyone from New Edition to New Kids On The Block to Boyz To Men played there.
No boy bands yesterday though. This was for the grown and sexy.
Opening acts like Tifa got it on and poppin' and even called for folks to dance and to even go home with each other, if anyone was so inclined. I don't think I ever heard anyone define the difference between a "wifey" and a "home wrecker" while performing onstage, but at a hot reggae show, anything can go down.
Alexis and Jacque got some fantastic photos and video footage. Be sure to peruse the slideshow. Jacque and I met actress Lisa Raye who got us a few minutes with Jemere Morgan (pronounced ja-MERE-ree), the third generation of the musical Morgan family. (Morgan Heritage the reggae band being the children of  Denroy "I'll Do Anything For You" Morgan, Jemere's granddad.) What a handsome and delightful young man, so excited and proud to be carrying that musical torch into the future. Be sure to listen to Jacque's and my interview with him via Soundcloud by clicking his name highlighted above.
It's so nice to see thousands of people -- positive people -- in one place, having a great time and getting along. Jamaica, Trinidad and Tobago, The Dominican Republic, St. Vincent, Monserrat, Haiti and more...all represented. There are times we aren't sure it ever happens, but it does.
Yet here's a phrase I don't ever need to hear again: "Where my independent ladies at?"


Kellie C. Murphy is the writing contributor to Trenton 365. You can read her other blog on the Six Flags Caribbean Concert and how Trenton 365 is making her feel like a reporter again HERE.

Posted by Kellie C. Murphy at 1:19 PM No comments: